What is a Miniature Circuit Breaker (MCB)?

What is a Miniature Circuit Breaker (MCB)? 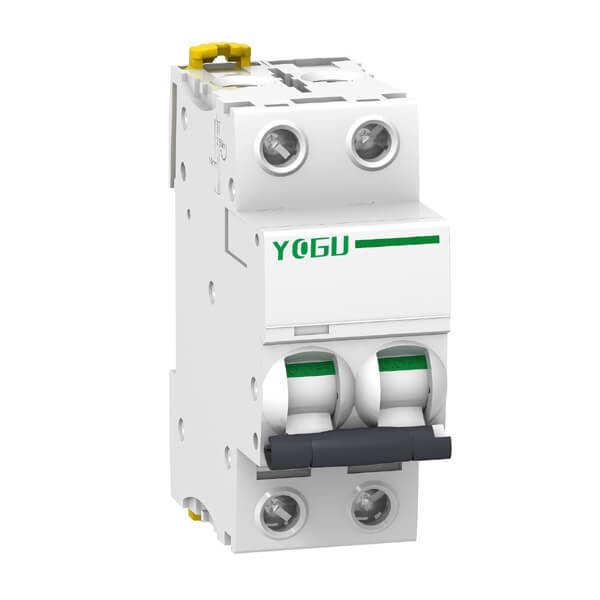 What is the current rating of the MCB?

A miniature circuit breaker is an electromagnetic device that carries a complete molded insulating material. The primary function of this device is to switch the circuit. This means to automatically open the circuit (which has been connected to it) when the current passing through the circuit goes beyond a set value or limit. The device can be manually switched ON or OFF just like normal switches whenever necessary.

MCBs are time-delay tripping devices. In these devices, the operating time is controlled by the magnitude of overcurrent passing through it, which means that the device functions whenever there is an overload existing for long periods, long enough to endanger the circuit being protected. MCBs do not respond to transients such as motor starting currents or switches surges. Typically, these devices are designed to operate at less than 2.5 milliseconds when there are short circuit faults and between 2 seconds to 2 minutes in case of overloads.

Overload occurs as a result of putting too many appliances on one circuit. This will make the circuit draw more current than it or the cable can actually take. This could happen anywhere in the home, but especially in the kitchen. Take for instance, when the microwave, kettle, electric bob, blender, and dishwasher are all being used simultaneously. The MCB on the circuit cuts power, thereby preventing a case of overheating and possibly, fire in the cable and terminals.

Short circuit occurs as a result of a fault somewhere in the circuit or electrical appliance. Short circuit is potentially more dangerous than overload as the speed and scale of the current is in a different order of magnitude. Short circuit happens when there is a direct connection between the neutral and live conductors. Without the resistance given by the usual circuit integrity, electrical current rushes through the circuit in a loop and increases the amperage by up to three thousand times in mere milliseconds.

The MCBs used in domestic installations are usually rated at 6000 amps or 6kA. SO the relationship between a typical domestic appliance rating and normal voltage (240v) allows that the over-current occurring as a result of short circuit should not exceed 6kA. However, in industrial and or commercial settings where 415v and large machinery are being used, it will be advised that a 10kA rated MCB is used. The ratings signify the max prospective fault current (PFC) that the MCB can take and still function properly by switching the circuit. Should the PFC be exceeded, this may cause failure in the MCB, which may result in contact welding shut.

MCB Working Principle and Its Classification

Usually, and under normal working conditions, the MCB works as a switch (a manual switch) used to put the circuit ON or OFF. In short circuit or overload situations, the device automatically trips. This will cause current interruption in the load circuit and rectify the problem. The visual indication of the trip can be seen as the operating knob automatically moves to the OFF position.

The automatic operation/ tripping MCB can be gotten in two ways; the magnetic tripping and the thermal tripping.

In short circuit or heavy overload situations, magnetic tripping is used more. Under normal working conditions, the slug is held in place by the light spring. This is because the magnetic field created by the coil is not strong enough to attract the latch. When there is a problem in the circuit, and current flows through it, the magnetic field created by the coil is strong enough to pull the spring holding the slug in position thereby moving the slug and activating the tripping mechanism.

Most MCBs make use of a combination of both thermal and magnetic tripping mechanisms. In both operations, an arc is formed when the contacts start separating. Then through an arc runner, the arc is forced into arc splitter. The arc splitter plates are also referred to as arc chutes.  In which an arc is formed into a series of arcs and at the time, energy is extracted and cools it. Therefore the arrangement removes arcs.

SO the MCB is basically used for protecting the circuit ( wiring, connected Load, equipment, appliances, etc.)  in cases of:

Below is some basic household application of the MCBs. Guide to MCB selection and installation.

All installations must be done by a fully qualified electrician on site. DO well to contact an electrician at sg.electgo.com they will get the job done. And note that there are certain standards which most domestic wiring schemes adhere to.

MCB with Type B trips instantly at a rate of three to five times it’s rated current. They are suitable for cable protection, residential and light commercial uses.

MCB with Trip Curve D trips instantly at a rate of ten to twenty times its rated current. Used for extremely high inductive loads such as motor with high inrush current. Because of their ability, they are suitable for specific and special industrial and commercial applications. Some common examples of the application of these devices include x-ray machines, UPS systems, large winding motors, and industrial welding equipment.

It is the current value above, which overload protection is tripped. For MCB it is fixed and the standard value range between 1A and 100A.

So we’ve been talking all about MCBs, their functionalities, applications, and a lot of different things. So in case, you need a company or experts to help you set up your MCB device and other electrical installations.

Hi, I’m Kevin, the funder of YOGU Electric, I’ve been running a factory in China that makes kinds of electric items for more than 10 years now, and the purpose of this article is to share with you the knowledge related to our products from a Chinese supplier’s perspective.
分享 facebook
Facebook
分享 twitter
Twitter
分享 linkedin
LinkedIn
上一个PreviousWhat is the advantage of a miniature circuit breaker (mcb)?